This Legend driver’s hard work and commitment to fulfilling her childhood dream has inspired others to also pursue a career in the trucking industry. For Sharae Moore, 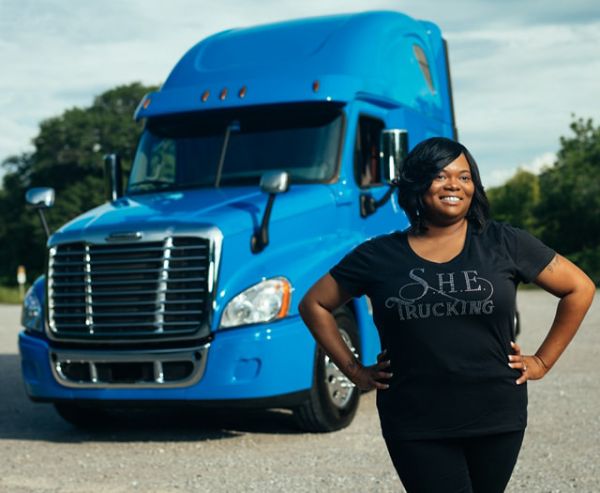 traveling the country as a professional truck driver became her reality in 2014. She is the founder and CEO of S.H.E. TRUCKING – established in 2016, the first clothing brand created by and for female truck drivers. Sharae’s trucking apparel is more than a style of fashion, it’s a way for women to feel good in the clothes they’re wearing while expressing confidence in what they do for a living. It’s also a sense of belonging; a sisterhood.

“I have met a lot of amazing, beautiful, strong, knowledgeable, and empowered women in all divisions of the trucking industry. One thing I have noticed is that women in trucking have limited fashion choices. I believe, the trucking industry is changing for women and I want to be a part of that brand. S.H.E.TRUCKING APPAREL™ is that brand. While traveling across the United States, I started designing my own trucking t-shirts. I could not find any t-shirts to purchase at the stores that said, ‘Yes, I am a WOMAN and Yes, I am a TRUCK DRIVER!’ So I created a lifestyle brand just for us! I hope women wear it with dignity and pride.”
-Sharae Moore

RISING STAR
At the age of five, Sharae’s first venture away from home took her to the big city of Chicago, introducing her to a world beyond all she had ever known. Since then, her desire to travel the country remained only an idea… at least, until the opportunity presented itself. 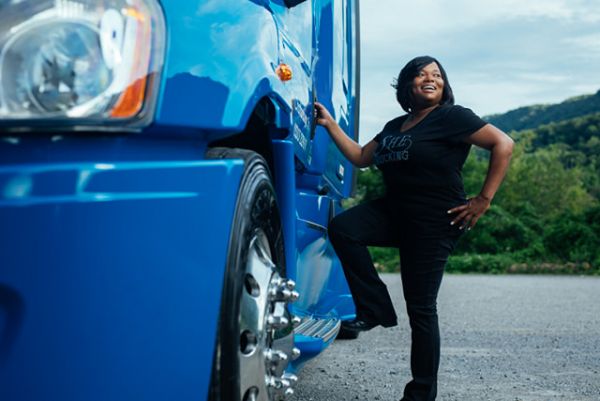 Growing up in Chattanooga, TN, Sharae came from a long line of male truck drivers. Her mother also drove a bus for several years. Though she had extended family in the trucking business, she never considered driving a tractor-trailer as a profession for women simply due to the unfamiliar image of female truckers. It wasn’t until much later in life, after her cousin’s unexpected passing, that caused Sharae to reflect on her family’s tragedy and make a conscious decision to live the remainder of her life with purpose and passion; in her loved one’s honor – starting with a new career in the trucking industry. A constant learner with a positive attitude and career-driven mindset, Sharae possesses many qualities truck drivers need in a role model.

She is currently a company driver, hauling refrigerated goods over-the-road in a 2018 Peterbilt. As a young, African American female in the driver’s seat of a big rig, Sharae represents so much more than ethnicity and gender. She started working full-time at the age of 14, as a waitress. By 16, she left home to receive training to become a medical assistant and unit clerk through Job Corps. After completing two programs, she enrolled at West Virginia State University to pursue a career in nursing. While attending college, Sharae auditioned for an internship for the Disney College Program. She was selected as one of the lucky students to spend a semester working at Epcot, and living at Walt Disney World Resort, located in Orlando, Florida.

The experience of interacting with people of all ages and nationalities from all over the world in one place, enjoying life, opened Sharae’s eyes to the true beauty of humanity: 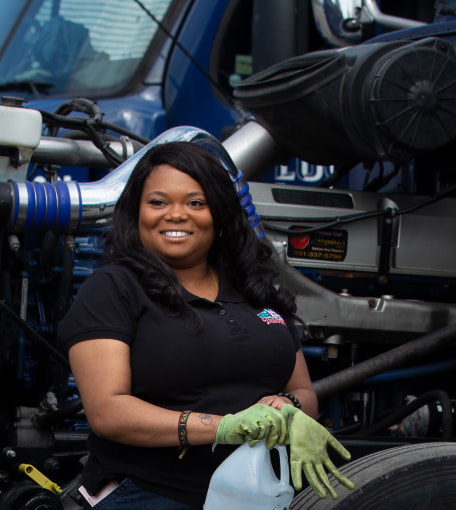 peace. It brings everyone together. She says, “I drove a fairy boat, shuttling people from one hotel to the next. There were so many different people every day. Getting to see kids’ faces light up and learning so many new things, it was all an experience of a lifetime that I will never forget.”

Sharae was always meant to make others smile. It takes a genuine heart to give love unconditionally without expectations, especially to strangers beyond barriers. That is what makes Sharae so special in a world in need of hope. Even as a teenager, she was being prepared for a higher calling.

LIFE WORTH LIVING
Sharae returned to college, but soon left again. This time under different circumstances. Her brother passed away at the young age of 30. She came home to visit from school a few times before receiving the bad news and was able to help care for her brother as a sister and nurse. After his passing, Sharae went on to become a certified nursing assistant (CNA), securing a position as a caregiver in her hometown for 8 years. As a young girl, Sharae’s grandmother was a licensed practical nurse (LPN). “I remember how loving she was with people and she gave that extra attention to her patients. I thought, I want to give that to others too. After all, when I was growing up, working as a nurse was one of the only roles that I saw with strong women in a professional atmosphere. I didn’t consider taking care of people necessarily a job; it was doing something nice; it was helping. I was raised that way, so it came natural for me,” Sharae explains.

Knowing her brother’s time was cut short, left an unsettling sense of sorrow lingering. While sitting with a patient at work, Sharae’s eyes gravitated toward an advertisement in a 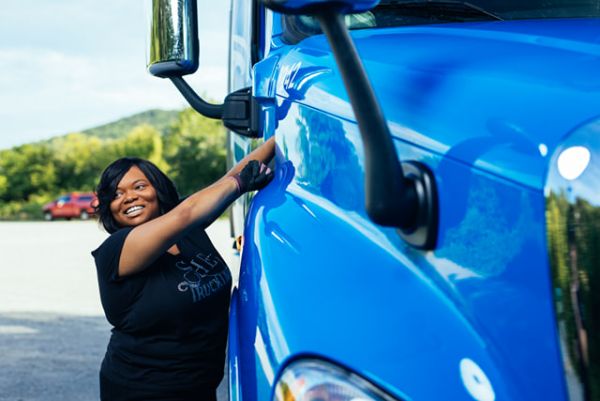 paper for a trucking company in search of drivers. Leaning on the idea of calling the phone number displayed, she began listing reasons why the trucking lifestyle would be a good fit for her: no kids, not married, and ready to travel. Sharae was ready to discover a new life, one worth living; to explore the country as she had always dreamed of as a little girl.

Leaving her profession in the nursing field completely behind for a new career path in the trucking industry was not open-and-shut. Considering the years of extended learning and training to obtain her CNA license, she plans to keep it active. Sharae packed up her apartment, sold her car, and contacted a trucking company that helped point her in the direction she needed to earn her CDL.

UP-AND-COMER
Her journey into the realm of trucking started off bumpy, but she prevailed; never once regretting her decision. Stating, “For me, backing up was tricky. It took some time for me to get comfortable with backing up, then I was able to get into a rhythm. Now, I let my window completely down and have a specific routine that works for me. If you have to pull up a hundred times, that’s okay. It’s all a part of learning and developing our skills as drivers. Many people beat themselves up trying to be perfect, you just have to be patient with yourself and know that it’s all a part of trucking: the learning, the traffic, the waiting on others, everything – it goes with the lifestyle. Don’t rush the process, learn everything you can, while you can.”

The first truck driving school was further from home than Sharae would have preferred, but she was eager to begin her adventure on the road. The sooner she became licensed 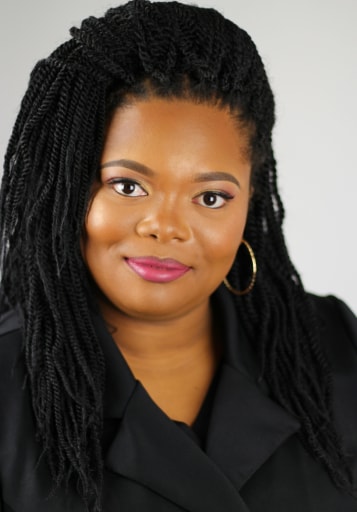 to operate tractor-trailers, the better. However, the 3 weeks of training offered was not sufficient. Sharae adds, “To be honest, I wasn’t comfortable yet. They wanted me to be ready on their schedule and I just wasn’t. Driving these semi-trucks is a very dangerous job, one that I take seriously. Safety is a priority. I just needed more time.”

Sharae found another trucking company in Memphis, much closer to home. The training she received was similar to comparing night and day, two entirely different views. Her new trainer explained how to do things, versus the others telling her what to do. The encouragement and patience given by her trainer also made a huge impact on her development as a trainee. Sharae wanted it noted that her driver trainer was a male, and everything she needed in a teacher. “He was professional, very knowledgeable, with years of experience. He really helped make sure that I understood everything correctly and wanted me to do well,” she said. Adding that there is a common misconception that new drivers don’t respect the old school drivers. Sharae states, that in her case – that couldn’t be further from the truth. She says, “They have all paved the way for us, I just want to add to it. As an up-and-comer, I want to learn from them and their stories.”

She landed with a regional company based out of Kansas City, MS, pulling dry van for two years. Initially, she knew a driver at the company who was transitioning into becoming an owner operator. Sharae filled his position, he then taught her how to drive a 13-speed, and she’s been in one since. She now runs long-haul for a family-owned business, but has plans to become an owner operator.

SHINING EXAMPLE
Sharae’s cousin, Sean Oglesby aspired to be a truck driver. She promised to take him under her wing, show him the ropes, and enjoy the experience together. She remembers 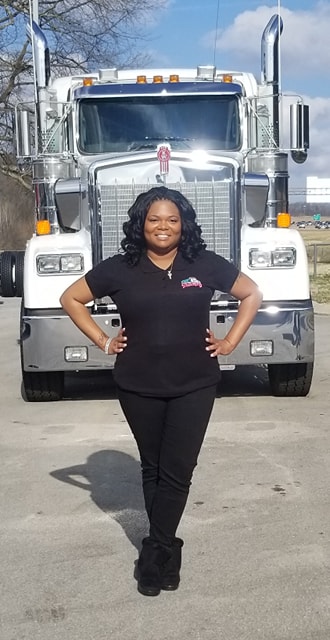 her beginning steps into the business and wanted to ensure her close family member’s was memorable, as well. Unfortunately, shortly after discussing their plans, Sean was involved in a motorcycle accident. His death was Sharae’s turning point.

“I didn’t want to waste another opportunity to help anyone else wanting to fulfill their ambitions or their goals of becoming a truck driver. I didn’t get to help Sean, but through S.H.E. Trucking I am able to make a difference with so many others.”

The day of Sean’s funeral was also the official launch of Sharae’s website. She dedicated the special day in his remembrance. April 1st, she celebrated her two-year anniversary of the brand. S.H.E. Trucking has 3,000 members in 27 different countries. It was important for Sharae that her group base the foundation on which they represent S.H.E. Trucking around principles she herself values in people: positivity, morals, and love. The worldwide mentoring program is designed to be a safe space for women to receive encouragement, further education, and advice while connecting life-long relationships within the trucking community.