ON THE RIGHT TRACK - James Hodge

ON THE RIGHT TRACK

This Legend article is about new beginnings and a fresh start, breaking old habits and discovering forgiveness. A person’s legacy is as important as the message they represent today – some must walk through fire to embody a testimony of their harsh reality – it is in those dark moments when triumph prevails. In order to understand and praise the victory, we must acknowledge the trials that led to the breakthrough.

Honesty creates transparency; the mistakes we hold ourselves accountable for also make us relatable… because, in all truth, nobody is perfect.

Repentance and a desire to work for God is the glory in which this Legend driver seeks. He has overcome his dependence of addiction 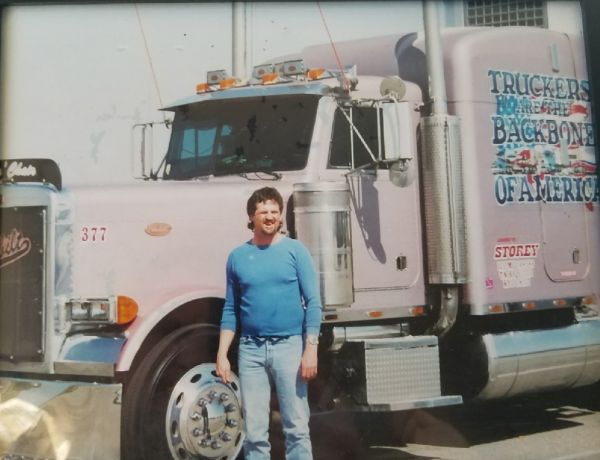 and has since dedicated his life, relationships, and career as a professional truck driver to serving a higher purpose. Culture and values are what develop one’s authenticity, our existence as individuals speak for who we are. It is seldom we find people willing to share with the public the true accuracy of their reality. But if more of us would do so, I believe others would succumb to the same revelation… that we have more in common as people than we care to admit. Flaws, mistakes, regrets – all of life’s errors that each of us live with.

You see, social media allows us to paint an illusion that we have figured how to live a perfect life, but nothing could be further from the truth. We are just irregular people living regular lives, some ahead of the game, others still swept in the current. The individuals who acknowledge their mishaps along the way and hold claim to their former life, as well as their highlight reel, are the ones that we can learn the most from.

James Hodge, born the second child of six in total, grew up in Ringgold, Georgia during the early 60’s. His mother, Shirley tended to their 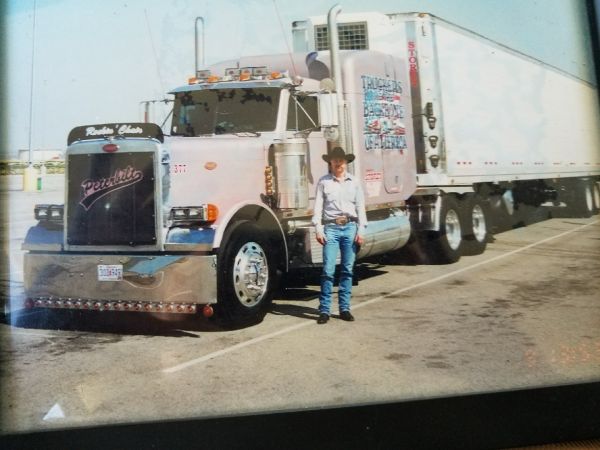 full house, while his father, Harold drove a truck for a living. Settled on a small piece of country land, James rode horses, enjoyed playing in the woods, fishing, and put in his share of chores around the farm. James’ childhood involved the familiar routine of kids his age, such as; sports, friends, and family. By 15, he began working at a nearby truck stop washing dishes at night. The atmosphere of his workplace consisted of drivers coming and going, along with their semi-trucks. Both of which James was accustomed to seeing, on account of his father’s profession.

He describes in detail summer trips spent in the truck with his father dating back to when he was only 8 years old. His favorite adventure occurred during his early teens, when Harold granted him permission to captain a voyage for the first time. He steered a 1972 cabover Mack from Tennessee down to Florida. It was in that moment when James realized his calling, however his life decisions years down the road led him the long way around. As a teenager, James’ world became one of seclusion and addiction that grew more troublesome with age. Stating,

“I ended up way out in this world, living a life of drugs, running from the Lord for over 25 years. Then, in 2006 while visiting a church, an

would constantly question this prophecy years and years later – How? When? Where are they? Finally, I had a vision that explained it all… I saw a semi-truck surrounded by so many people. I remembered scriptures and images painted across the trailer, every detail was engrained into my soul. I have that truck now, and when people see it, I explain that all of it was inspired by God.”

alter call was announced and I was told that one day I would stand before thousands of people and share my testimony. I remember how I

In 2019, James’ vision came to life – his 1985 359 Peterbilt with an extended hood has been completely restored with a 3408 V8 engine. The 2000 trailer is a double drop deck Haulmark, with airbrushed graphics. At the Great American Trucking Show last August hosted in Dallas, Texas, James entered Overdrive’s Pride & Polish (Truck Beauty Contest) taking first place in the Combo First Show category. Titled, “Mighty-fine 359” the evolution of the show truck merits a testimony of its own. With a driving career consisting of 40 years (off and on), and over 2-million lifetime miles, James’ experience entails 9-speed transmissions to 18-speed, pulling dry van, refrigerated, tankers, and doubles.

James initially obtained his chauffeur’s license at age 18. It was during his time in the oil field, before he began his driving career, when he 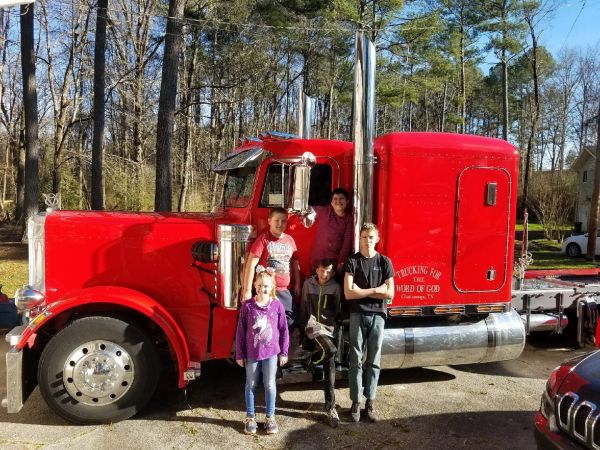 crossed paths with a young driver by the name of Brad Tims. Twenty-year-old James relocated further south to be closer to his father, who had established his trucking company in Texas. James landed a job as a hot oil operator, running test tubing for wells – a position he maintained for 3 years until the oil business took a hit. Similar to James, Brad’s father owned a business in the oil field, where Brad operated as a full-time driver transporting tank rentals. When everyone began to scramble in search of new careers, Brad remained in Texas, while the father and son duo moved to Arizona prompting James to join the family operation, K & H Trucking pulling LTL.

In 2003, James reconnected with Brad and offered him a ride from Midland, Texas to Phoenix, then back to Midland on a work load. Brad had never traveled beyond Texas state lines prior to the 2-day trip. The friends agreed to another adventure, this time extending their outing for a total of 12 days. From Texas, the two headed out West to California, across to the Carolinas, and back through Tennessee on the return down South. A bond for trucks and exploring the country served as the foundation of their friendship that ultimately helped complete James’ foretold calling. Brad partnered with his close friend and Cynthia (James’ wife), as all three became the owners of the show truck we now know as, Mighty-fine 359.

The show truck is a symbol of their trucking ministry, evident at first sight. James patented and registered the logo, “Truckers are the

backbone of America” back in 1999. The popular (and accurate) slogan is proudly displayed on the neck of the trailer, while a tribute to our nation’s military forces cascade along the passenger’s side. The opposite view is a work of art in itself, featuring biblical images all airbrushed by the hands of artist, Mary Lovell.

Over time, James felt led to openly share his testimony – unaware of the direction, nor impact his vulnerability would serve. In 2016, his quest to serve as a spiritual leader among his church family, stretched further than the pews and pulpit, becoming an extension of his work life. A trucking ministry had begun under the advisement of James and Brad, which now includes Cynthia and their truck, as additional exposure. Understanding the need for spiritual leadership, James’ focus was to create a ministry available to working men and women within the trucking industry, while demonstrating through mentorship that it is never too late to begin living a life of freedom. Trucking For the Word of God Ministry is a nonprofit organization with a mission to spread the message of salvation, forgiveness, and faith. James says,

“With the truck officially on the road, we set it up at every event and opportunity presented to us. What better way to grab everyone’s 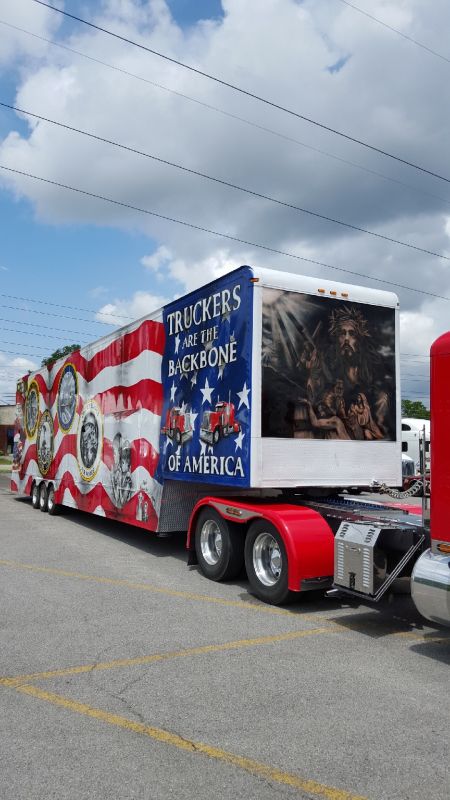 attention than with a visual of what our ministry represents? Our truck is a commemoration of our Lord and Savior, our trucking community, and honoring our brave military forces – current and veterans. We feel the military deserves the recognition. Without all three, where would our nation be? Lost, as I once was. It all ties in together, these soldiers are willing to give their lives, the biggest sacrifice known to man, same as Jesus Christ did for us.”

James encourages everyone to find them on Facebook under, Trucking For the Word of God, or contact him directly at 423-800-2314 and let him know when and where they can bring their truck. That is the beauty of what separates their ministry, they bring the message directly to the drivers. He continues,

“Brad and Cynthia are behind the ‘how’ we are able to make this happen, and the one upstairs is the ‘why.’ He has made it all possible! He is the one that turned a man like me into a walking miracle. I try to be as transparent as I can, to show that I have lived a life of darkness, but God brought me through my past to today. That’s why I have to share my journey, so that others can join me. I am a soul winner for the glory of God – it’s that simple.”

Similar to the fellowship within his ministry, James states that the trucking community is known for its comraderie and brotherhood. Being able to relate to drivers as a second-generation trucker helps remind others that he is cut from the same cloth. Connecting with people, whether on behalf of his backstory or the show truck, James accepts that his professional and personal life are both an ongoing process that will continue to unfold in front of everyone. The ministry’s social media exposes James to the elements of today’s internet devotees. As a person of change, he explains that his realism can be found in the purity of his commitment.

Known to many as Reverend James Hodge, he is a member of Canaan Baptist Church, located in Chattanooga, Tennessee, where he also teaches the young men’s Sunday school class. He has one daughter, Brianna and grandson, Malaki. Briana has joined her father in the truck on many trips, starting as young as 10 years old. During James’ free time, he likes to take his motorcycle out across the Tennessee mountains and through the country scenic routes – remaining a nature lover at heart. Each year, he and his close friend, Gary Williams participate in their local Toys for Tots motorcycle convoy.

With 15 years of experience as an owner operator running over-the-road, he enjoys driving local work for Tranco Logistics LLC, returning 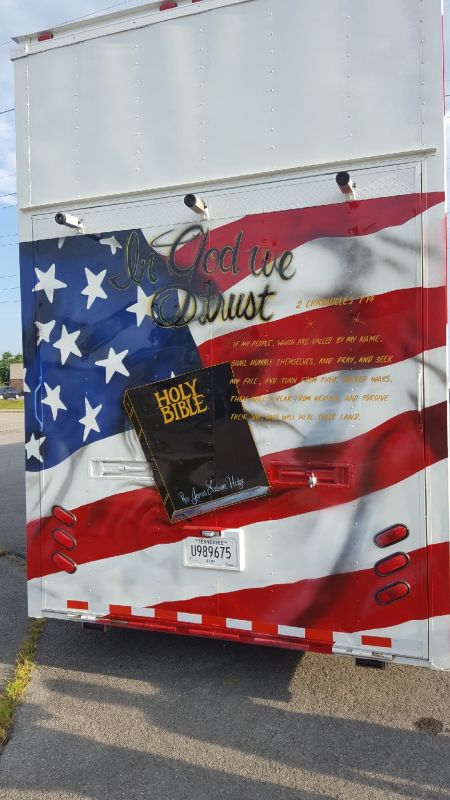 home every night. His future plans are to continue promoting the show truck and broadening their trucking ministry. As everything aligns on track in His timing, the flow of details come together with ease. Sometimes surrendering is not a sign of weakness, but strength. James is the prime example, if anyone is unsure of sharing his or her testimony – know that everyone is curious to know more about one another – particularly because most enjoy a good story. Real conversations begin with real people, and a good story provides a brief break from our own lives. One with victory could possibly plant a seed; often being obedient is the task alone. The journey further is not yours to travel, but the listening ears… or in this story, the reading audience.