THE KEYS TO DISCOVERY - David Lichtenberger

THE KEYS TO DISCOVERY

Creating a life filled with joy may seem far-fetched, similar to a fairytale world in which struggle, and hardship do not exist. Howbeit, the bliss forged from joy itself is a sense of true happiness with life-changing potential, available to all who seek. Given the diversity of our nation divided by religion, politics, and so forth, at the core of each individual is a passion to fulfill one’s purpose; discover his or her opulence and splendor in completion of an ideal resolution.

What joy provides in life is as essential to the air we breathe. It brings into existence an exuberance to pursue all things great. Discovering 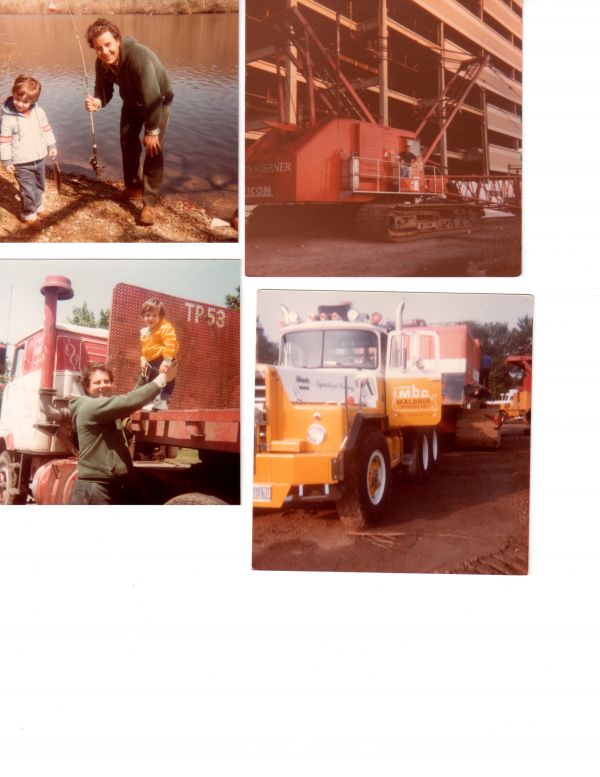 joy shapes a healthier mind and body, provides spiritual peace, encourages a willingness to help others, and most importantly, establishes an unending experience of happiness by which all areas of life improve in a positive manner. Work flow becomes less stressful, quality time with loved ones is truly appreciated, and day to day routines are enjoyable because in everything surrounding lay countless blessings that may otherwise go unnoticed if not for the joy that resides from within.

This Legend nominee is a third-generation driver who embodies the timeless optimism of old school values, coupled with his Christian faith and unwavering outlook toward positive thinking. His career in the trucking industry has expanded 24 years with over 2-million lifetime miles, in which he has received several awards in recognition of his safe driving.

The only child of a hardworking family, the ideals of attaining success were developed early on. Originally born in Passaic, New Jersey, David Lichtenberger was raised in Wallington before his family relocated further south to Deltona, Florida. At 13, David was back on the east coast settling in Pennsylvania where he currently resides in Palmyra. Charles, David’s father drove a truck for a living while his mother, Yvonne worked at an insurance company. Charles later started his own dump trailer company operating regional. The father and son duo began their road trips in the truck when David was only 4 years old. By 8, he was in the driver’s seat moving trucks around in parking lots and slipping behind the wheel on the interstate when his father permitted. Raised by a seasoned driver, groomed from day one, David was vetted with infinite quotes ingrained in wisdom…

“Take it one day, one mile at a time. Don’t let the clock and truck control you; your safety and well-being is more important than any money.”

“Control is the name of the game and expect the unexpected.”

“Be the best driver and person you can be. The world doesn’t need a hero, just more good people doing good things.” 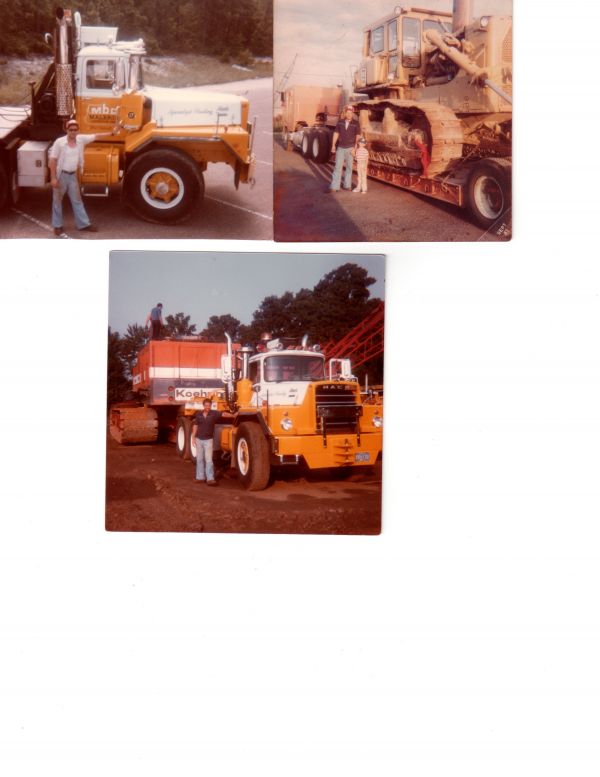 Each educated riddle spoken from experience, passed down from one father to the next – David shares his driver’s doctrine, understanding that his schooling stretches beyond the walls of a classroom – he is one of the lucky drivers to receive hands-on training beginning at childhood during an era when truckers were a one-stop-shop. Managing their own repairs, maintenance work, the whole shebang – David was taught to do it all.

Reflecting on his childhood, riding alongside his father versus today’s roads, David addresses how he has avoided the entire shift of dynamics among drivers. Stating,

“My father drove trucks during a much different time in trucking. I remember when he had issues with his truck, the guys would walk over right away, and he was one to do that too. You would hear drivers ask, ‘Are you ok?’ We don’t see that happening much anymore – people stopping to help each other. It’s a brotherhood out here on the road, that will never change, so we need to have more empathy for our fellow drivers and motorists. Be courteous and willing to help others… That is how I was brought up… To be a decent person.”

Charles passed away in October 2018, entrusting his son with a legacy of knowledge and kindness to carry forward as the bedrock in which to build upon for success. David holds tight to the years of invaluable insight, leaning on his father’s promising words: “Don’t let anyone ruin your day, the only way they can is if you let them.” When life’s burdens try to wedge themselves in, David shares his thought process on how to deflect arising negativity…

“It’s all about having the right perspective. During those moments that are brimming with stress, or I wake up in a foul mood, I’ll ask myself… ‘Am I alive? Do I feel good? Am I healthy? Then what’s my problem? – 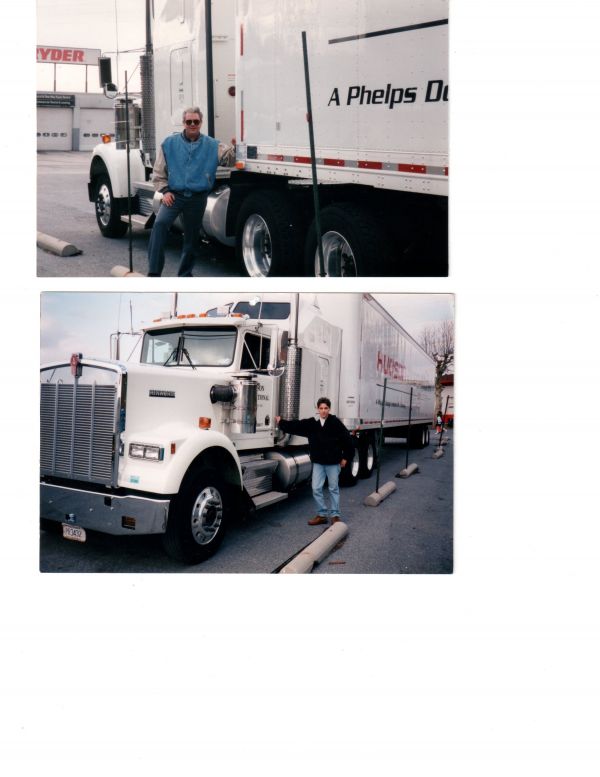 because when I remind myself that God gave me another day, I know that I’m going to be okay no matter what is going on in that moment. So, for that reason alone I don’t let stress get to me. You can’t! Why waste time on being upset or letting a good day get ruined when you have been given another day… Life is too short, it’s important to focus on the joy in things and not worry about the rest.”

For 19 years, David has operated as a shuttle driver for Fresenius Medical Care; a company specializing in kidney dialysis products and services world-wide. He typically starts his work day when most of us are asleep. Running a night line haul, his regular hours are from 7 in the evening until 9 the following morning, pulling a 53 ft. refrigerated container for temperature-controlled cargo. His locations vary between residentials, hospitals, and dialysis clinics with multiple stops (local and long-haul) providing product for drivers accommodating same-day delivery. He also transports common carrier loads for freight brokers.

Having never driven west of the Mississippi River, the majority of David’s itinerary consists of larger cities, such as; Washington D.C., Philadelphia and Baltimore. Although he is not a fan of the heavy traffic nor the winter up north, nothing negates from the panoramic view of a breathtaking city skyline – especially, at night when all the lights illuminate the city’s features. Stating, “Every angle provides a view unlike any other no matter where you are. All you have to do is look around and take it all in. Of course, driving a truck downtown in high volume traffic doesn’t sound appealing, but it’s hard to deny the picturesque sights I get to see first-hand.” These picture-perfect scenes that he describes have been dancing before him for many years. Their familiarity possibly serve as a reminder of a childhood spent riding in a truck beside his father. Life on the road for David has come to include these massive cities, radiating lights in every direction resembling the Christmas season – festive, bright, and cheerful – but rather on a regular Tuesday evening in the Spring time.

David knew he wanted to drive a truck since he was a little boy. His grandfather worked at a factory driving a potato chip truck. His father did both, local and long-haul pulling every type of trailer from tanker and dry van, to low boy. His forte was heavy haul, transporting over-sized loads – setting a record gross with 360,000 lbs. on a single load traveling at 12 mph. Gone are the days when the sole agenda was completing the job in its entirety, despite regulations. Many second and third-generation drivers witnessed a type of environment that allowed a professional driver the freedom to work under their own discretion, given their load arrive on time. The term, “safely” may have been used lightly as long as the task at hand were complete. What stands to be misinterpreted is the fact, the leeway old school drivers were given improved their safety measures in order to avoid mishap. Today’s rules and regulations underestimate the competence, proficiency, and advancement of skills that professional drivers demonstrate daily. The importance of safety was an extremely important component that Charles expressed to David early on. To this day, David states that he is systematic and strategic in his work, yet safety always came first.

“I’ve been a quick learner all my life, on account of the way my father made me figure things out on my own as a kid. In turn, it helps with 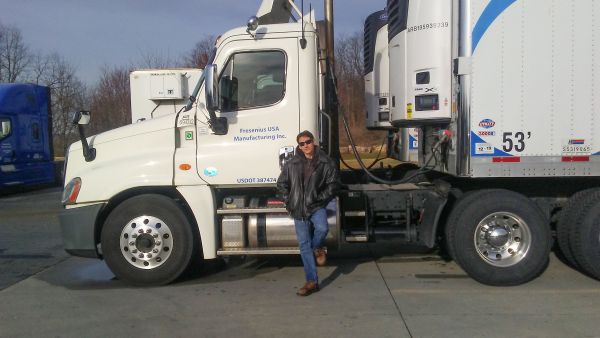 trip planning and getting jobs done accordingly. I work hard, but I work smart. It’s a challenge out here, I enjoy it and it pays well… By working smart, means you have to drive safe, but also take care of yourself – eat good, sleep well, exercise – your body needs nourishment just like your truck needs to be properly taken care of in order to run its best.”

Like the men before him, David was a natural behind the wheel and mechanically inclined. He began his driving career a week after graduating high school, starting in smaller trucks and cargo vans. He secured a position hauling heavy duty truck parts, delivering to local garages and trucking companies. The following year, he moved on to auto parts running regional work, 400-plus miles a day, out and back. Next, he hauled air freight, motor freight, and expedite freight before venturing into the medical field transporting pharmaceuticals. In 2001, David joined the mega fleet of company drivers at Fresenius Medical Care.

Currently in a 2014 Freightliner Cascadia, undeterred by the weather of any location, David is quick to wash his truck at the drop of a hat. An obsession of cleanliness, no climate too cold or hot can sway him from keeping his truck immaculate. That same practice he extends to his show trucks – during his off time he restores and customizes trucks; specializing in the trade he enjoyed as a pastime with his father. He has modified 3 trucks, keeping 2 for personal use. If not for driving trucks, he more than likely could have fared well as a successful mechanic.

While away on the road, David is a regular listener to the Road Dog Trucking Radio channel on Sirius XM. An avid caller on the Tim Ridley Show, he is known by his handle, Chrome Badger. David and Tim formed a friendship proceeding from a shared passion for the trucking industry, their love for Jesus Christ, and desire to spread kindness in a world in need of compassion. A mutual respect for one another, both men continue in their line of work hoping to be the example others recognize and emulate further.

Embracing his lifestyle as a professional driver following in the footsteps of the men before him, David says that every milestone he has achieved in his driving career has helped shape him into the person he is today. Driving a truck for a living has submersed him into the lives of each person he crosses paths with. Stating, as a driver he is exposed to many different walks of life and cultures – which he possibly wouldn’t experience if not for his profession. David’s message to our readers is simple; Jesus Christ is our Savior and our life on Earth is temporary…

“…but while we are here, let’s do some good and live the best lives we possibly can. God gave us this life, why not make it count? Each day goes about how you make it… find what brings you joy and spread that happiness into the world.”